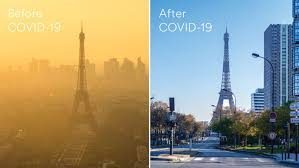 We have seen how the climate changed and how tornadoes, landslides, tsunamis, hurricanes, earthquakes, and melting ice affecting the planet Earth in the past years. Most of those dangerous forces of nature were the result of human activities and the government’s ruling on the environment. For instance, the melting ice in the North Atlantic is due to the carbon dioxide and greenhouse gas emissions that are increasing the temperature in the poles, which causes the water to melt and rise.

Therefore, several scientists are expecting to see megacities and islands disappear in the next few years to come if no legislative measures are ratified. Other examples would be air pollution, solid and liquid particles, and gases spread by factories, trucks exhaust, cars, or wildfires. These examples affect the ozone levels and the population, with diverse diseases such as lung cancer or any chronic respiratory illness.

The phenomenons are innumerable, that it has brought activists from around the globe to protest, march, and deliver speeches at international organizations with the same purpose in mind of major reforms regarding climate change.

March 2020 was the first appearance of the first reported Covid-19 cases in the United States. Unfortunately, we all saw how the pandemic devastated the lives of thousands of Americans. A year later, the number of deaths and cases is steady, despite the emergence of vaccines in the country. However, a major question remains, Have we seen any progression in the climate during the midst of the health crisis?

Some scientists expressed that the health crisis has slowed the air pollutions in few cities such as New York, Beijing, Oslo, or Paris. The lockdown measures on factories have improved the weather and the climate.  According to an article from PhyscisWorld titled “Has the COVID-19 lockdown changed Earth’s climate?”, The California Institute of Technology in the US, and colleagues demonstrated that “the reduction in air pollution across Europe since the 1970s has altered the strength and location of high-altitude winds, shifting the jet stream further to the North during winter,” (Ravilious).

In conclusion, would this considerable climate change last? Only time would tell. Activists are still continuing their fight for environmental improvements as they are hopeful to see the governments from around the world to take serious resolutions.